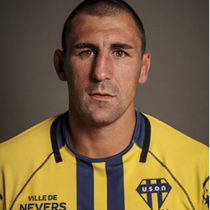 The 27 year old began his career in his native Argentina with Rosario based club Logaritmo Rugby Club, before, in 2007, he joined Italian club Overmach Parma. Vallejos’ form for Overmach Parma earned him a move to English giants Harlequins in 2010. Vallejos spent two years at Harlequins, where he made 56 appearances and earned his maiden Argentina cap against Georgia at the 2011 Rugby World Cup during his time at the London club. Vallejos agreed to join the Scarlets in the summer of 2012.