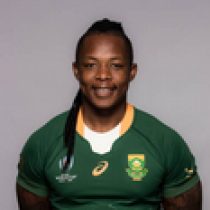 Known as Skisha to his teammates, Nkosi breaks the mould of the traditional South African winger, usually known for being fast and evasive.

Nkosi got his first taste of provincial rugby when he was selected for the Pumas U16 Grant Khomo side, before he moved to Johannesburg and attended Jeppe Boys High School.

After high school, Nkosi moved to Durban to join the Sharks. He made eleven starts for the Sharks U19 team in the 2015 .

2016 saw Nkosi make six appearances for the UKZN Impi in the 2016 Varsity Shield competition, scoring one try against UWC and two in their 63–30 victory over the TUT Vikings as his side won seven of their eight matches in the competition.

In March 2016 he was included in the final South Africa Under-20 squad for the 2016 World Rugby Under 20 Championship tournament.

He started in the opening 3 matches for the U20s before he suffered a thigh injury which ruled him out of the remainder of the competition.

Nkosi was included in the Sharks' squad for the 2016 Currie Cup but failed to make his debut. At the end of October 2016 but only went on to make his debut the following season in the win against the Western Force. Following a good Super Rugby season he went on to score 8 tries in the Currie Cup and missed out on Bok selection after picking up an injury.

He has once again been included in the Sharks 2018 squad where he will look to improve on his impressive start in the competition where he made 7 appearances scoring 3 tries.

Nkosi scored a brace on his test debut against England at Ellis Park. In September 2018 he was named 'Newcomer of the Year' at the Kwazulu Natal Sports Awards