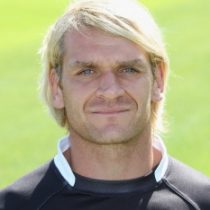 MacLeod had a year's stint with Japanese outfit Kobe Steelers during 2011/12. Prior to his move to the Falcons, the Hawick-born 34-year-old played for Border Reivers, Scarlets and latterly Edinburgh. MacLeod won his first cap in 2004 and made his final appearance against Wales in Scotland's 2011 Six Nations campaign. MacLeod made quite an impression during his first season with the Falcons making 32 appearances in all competitions. His tough-tackling and strong ball carries earned him both the Player of the Season and Player's Player of the Season awards at the 2013 end of season presentation night.

Midway through the Falcons 2015/16 season MacLeod retired from rugby and took up the line-outs coaching job at Newcastle Falcons.