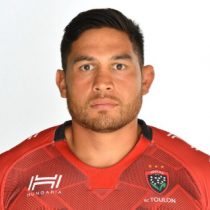 June 2016 saw him being selected in the France 28-man squad for their tour of Argentina before being signed by Toulon for the 2017/18 season.