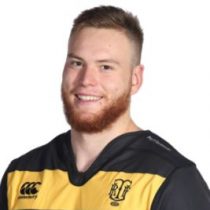 A promising forward coming out of Chiefs' country Fin Hoeata represented the New Zealand U20s at the 2016 World Rugby Under 20 Championship.

Hoeata regularly plays lock but has also been selected on the side of the scrum for Taranaki who we debuted for in 2017.

His impressive performances in his debut season with the Mitre 10 Cup side lead to a Super Rugby contract with the Chiefs for 2018.

Hoeata has been part of the Chiefs Academy and was included in the Super Rugby squad in 2017.