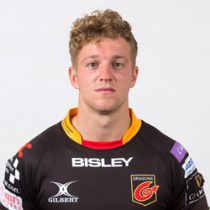 O'Brien was part of the Dragons U18s set-up and went on to earn 7 caps for Wales U20s. Having previously played for Principality Premiership side Cross Keys, O'Brien made his debut for the Newport Gwent Dragons on 12th September 2014, aged just 19 years old.

O'Brien was also part of the Dragons 7s team that were crowned champions of the Premiership Sevens in 2015.

In May 2018, the flyhalf signed a deal with the Scarlets from Dragons.