TOP 14 Round One Wrap Up And Team Of The Week

The opening weekend of the TOP 14 did not disappoint with Biarritz kicking the new season off with a shock 27-15 victory over Bordeaux.

We take a look at the opening weekend's game and pick our team of the week. 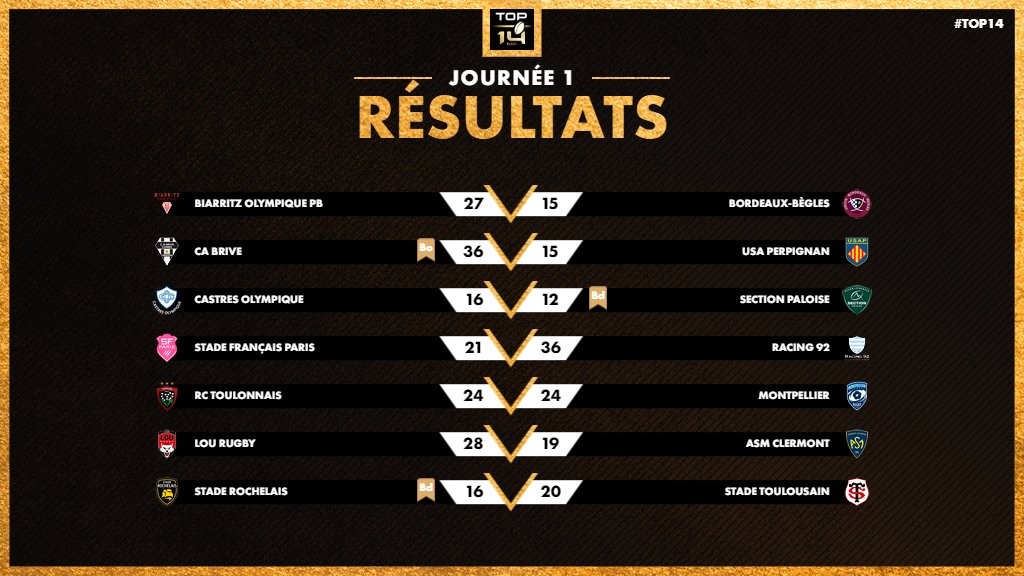 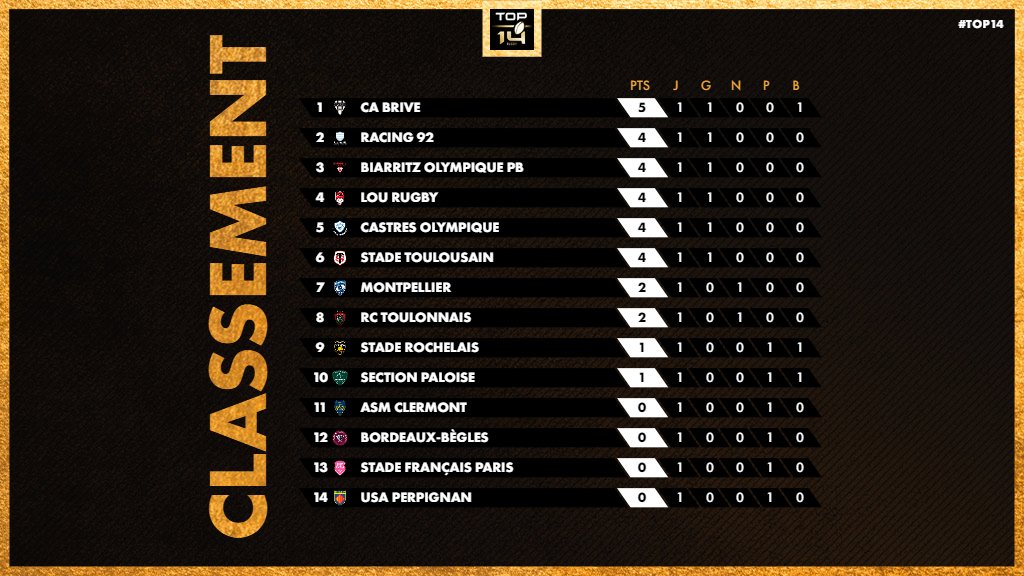 A last two-try burst from Bordeaux was not enough to see them avoid defeat as Biarritz returned to the top-flight of French rugby with a stunning win over last season's semi-finalists.

Brett Herron opened Biarritz's account with a penalty in the 18th minute as the hosts took a 3-0 lead. The flyhalf, who was on debut having joined the club from the Harlequins, scored the first try of the season after a thumping tackle by Francis Saili and the pivot added the extras to give Biarritz a 10-0 lead after 24 minutes.

Matthieu Jalibert cut the lead with a penalty but it did not last long as hooker Lucas Peyresblanques rumbled over at the back of the maul to extend Biarritz's lead. Herron added the extras with Jalibert missing a second penalty as the hosts lead 17-3 at halftime. Romain Lonca scored a long range turnover try in the 44th minute as Biarritz went 24-3 up.

Herron added a further penalty before Biarritz went down a man with Guy Millar going to the sin bin. Bordeaux did not take advantage of the extra man but finally broke through in the 73rd minute with Alban Roussel dotting down. Yoram Moefana grabbed another for Bordeaux but by then the damage was done as Biarritz ran out 27-15 victors.

Life in the Top 14 got off to a rocky for Perpignan as they suffered a 36-15 defeat to Brive in their opening game of the season with Brive flyhalf Enzo Herve claiming a full house in a masterclass 26 point performance.

Herve opened his account with a penalty in the fifth minute, scored a try in the 11th and hit a drop goal just before halftime to give Brive a 26-9 lead at halftime.

Tedder and Herve traded penalties before the hour mark before Setareki Bituniyata scoring the bonus-point clinching try in the 67th minute.

Castres kicked off their season with a narrow 16-12 win over Pau. Zack Henry scored all 12 of Pau's points in their opening game slotting three penalties and a drop goal.

Meanwhile, Ben Urdapilleta scored the only try of the game with his goal kicking paired with that of Ben Botica and Julien Dumora saw Castres to victory.

Racing 92 surged to a 21-36 win over Parisian rivals Stade Francais in their opening game of the season. Stade Francais started the brighter of the two sides with Joris Segonds opening the scoring in the 2nd minute of the game.

Maxime Machenaud and Antoine Gibert both knocking over penalties to give Racing a 3-6 lead. Camille Chat scored in the 20th minute after a massive carry from Yoann Tanga from the back of a scrum to give Racing a 3-13. Segonds cut the lead by three but Racing hit back with a scintillating try finished off by Donovan Taofifenua.

Racing would hold onto the 6-20 lead into the break. Segonds and Machenaud traded penalties before the hour mark with Machenaud adding another after the hour. Sefanania Naivalu finished off a wonderful try in the 67th minute after a superb break by Ngani Laumape from a lineout. Nolann Le Garrec made it 14-29 in the 71st minute with a penalty. Olivier Klemenczak finished off an 80-metre stunner before Stade Francais got one back through Kylan Hamdaoui.

A cracking game till the end, Zach Mercer scored a late try on his debut for his new side to draw the game.

Toulon dominated the opening proceedings kicking two successive penalty kicks to opened their lead at the top. Tisseron struck back with a try, while Belleau continued his penalty kicks. Montpellier came out the stronger of both sides in the second half.

Two tries from Ethan Dumortier guided Lyon to a season-opening victory over Clermont.

Clermont started brightly with JJ Hanrahan scoring just seven minutes into his debut for the side. Morgan Parra converted the try but Clermont's lead did not last long with Xavier Mignot dotting down just four minutes later with Leo Berdeu converting to level the scores at 7 points apiece.

Three consecutive penalties from Parra gave Clermont a nine-point advantage but a quick double from Ethan Dumortier and a penalty from Leo Berdeu saw the hosts lead 22-16 at halftime. With four tries in the first half, the second half was all penalties with Parra slotting one and Berdeu slotting two as Lyon ran out 28-19.

A great game of rugby from both sides. Toulouse dominated the opening proceedings of the game. La Rochelle took over the dominance late in the first half to take a 10-9 lead at the break. Plisson further extended their lead at the top with 2 early penalties in the second half. Skelton got sent off for a shoulder to head hit which changed the proceedings. Ntamack scored a try soon thereafter and a Ramos 74th minute penalty kick sealed the victory over La Rochelle.


OUR TEAM OF THE WEEK