Ahead of their clash in the United Rugby Championship quarter-finals, we take a look at either side's route to the knockouts.

The Stormers won 12 matches and drew two to finish on 61 log points, good for second on the Vodacom United Rugby Championship standings and first in the South African Shield.

It is a remarkable finish for a team that started the season with one win from five matches, the last of which was a 37-19 defeat at home to the Emirates Lions in December.

That match gave way to a break of almost eight weeks and apparently time off was all the DHL Stormers required.

At the resumption of the league, the DHL Stormers travelled to fortress Loftus Versfeld where they edged the Vodacom Bulls 30-26, next followed a 22-22 draw against the Cell C Sharks in Durban, victory against their coastal rivals in a Cape Town rematch and finally sweet revenge in a 32-10 romp against the Emirates Lions at Emirates Airline Park.

The striking turnaround in form suffered a setback in Galway when the DHL Stormers conceded two yellow cards in a 19-17 loss to Connacht, but they responded to the bitter taste of defeat with a renewed sense of purpose at home that sparked a run of seven consecutive victories before the Cape side beat the Scarlets 26-21 in Llanelli to end the regular season and book a quarter-final at DHL Stadium. 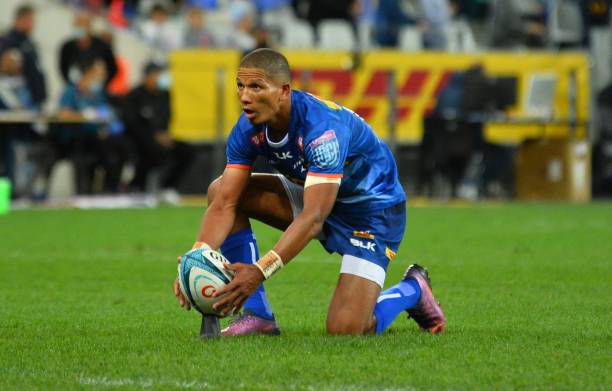 Manie Libbok was the top point scorer in the Vodacom United Rugby Championship with a haul of 148 points. The flyhalf converted 32 of the DHL Stormers’ 60 tries, kicked 23 penalties and scored three tries. Libbok’s biggest input was 14 points in a 24-10 win at the Dragons but his passes and kicks were crucial in Leolin Zas scoring the most tries in the league with wing teammate Seabelo Senatla close behind.

The Stormers were in sixth place when they hosted second-place Ulster in Round 14, and the Irish team was riding the momentum of seven successive wins.

The Ulster pack included former DHL Stormers stalwart Duane Vermeulen while the hosts channelled much of their attack through the successor to the No 8 jersey, Evan Roos.

The apprehension about Ulster seemed to have been misplaced when the hosts bolted into an early 14-0 lead and Libbok kicked two penalties to take the DHL Stormers 20-13 clear at half time. However, the touring team showed their class in the second half. Precise kicks put the DHL Stormers on the back foot, limiting them to three points as they were pinned to their 22 where they tackled for their lives and held on for a telling 23-20 win.

If the Scottish capital had hosted all Vodacom United Rugby Championship matches this season, it is logical to assume Edinburgh would be hosting a quarter-final instead of migrating south to face the DHL Stormers in Cape Town.

Edinburgh lost as many home matches as Leinster and the DHL Stormers, that is to say one, and ended the regular season with a 28-11 victory against Glasgow at Murrayfield for a record seven wins and one draw in nine matches at home.

Turning their respective home grounds into a fortress pushed Leinster and the DHL Stormers to the top of the table but Edinburgh finished seventh after putting Glasgow to the sword.

Miserable away form rained on Edinburgh’s campaign as six of nine expeditions resulted in defeat. Having started the season with six wins from eight matches, Edinburgh slumped to a run of three consecutive losses at Ospreys, Leinster, Munster. After hammering Connacht at Murrayfield, Edinburgh then punctuated two more away losses with a memorable victory in Durban before salvaging their playoff dreams with home wins against Zebre and Glasgow. 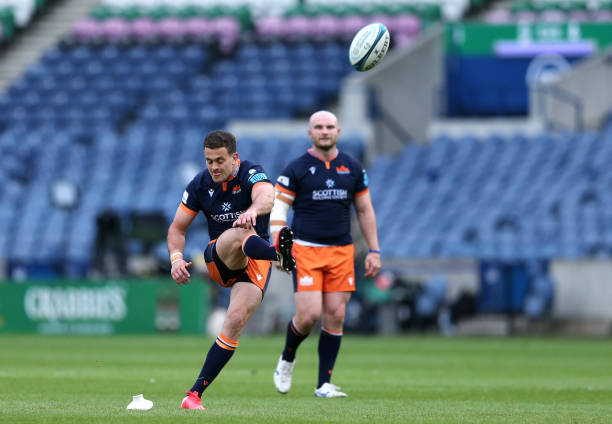 Emiliano Boffelli edges flyhalf Blair Kinghorn for the honour as the fullback was the more prolific goal-kicker of the two.

Boffelli and Kinghorn each scored six tries in 12 appearances for Edinburgh, but Boffelli contributed an additional 72 points off the tee, finishing among the URC’s most accurate sharpshooters by converting almost 90 percent of his kicks at goal.

The 40-capped Argentina back scored 21 points in a big win against Connacht and 13 in the decisive win that pushed Edinburgh above Glasgow on the final standings.

Facing a crisis of confidence after away losses at Ospreys, Leinster, Munster and Glasgow, Edinburgh collected themselves for a journey to Durban where they blew the Cell C Sharks out of the water.

Heavy rain ensured water was in oversupply at Hollywoodbets Kings Park when the teams met in Round 14. And, aided by the inaccurate kicking of Cell C Sharks flyhalf Curwin Bosch and a yellow card to centre Marius Louw, Edinburgh slipped and slid to a 21-5 win thanks to tries from flyhalf Blair Kinghorn and fullback Emiliano Boffeli.