Looking ahead to the weekend's Rugby Championship action

Another feast of Southern Hemisphere is on the horizon with repeats of last weekend’s match-ups as Los Pumas meet the All Blacks and the wounded Springboks do battle with Dave Rennie’s Wallabies.


The Pumas were taken apart a week ago by a typically clinical and ruthless All Black outfit.


However, New Zealand Head Coach Ian Foster rang the changes for the return clash, with only three survivors from last week. 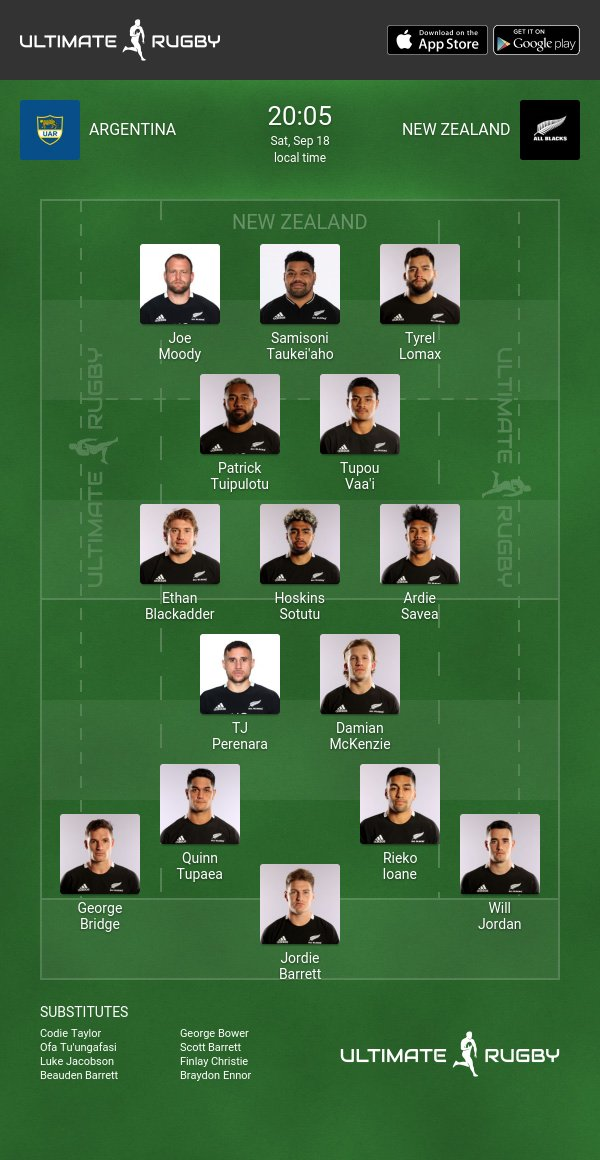 One of the more noteworthy selections is that of the quick-footed Damian McKenzie at flyhalf – a prospect which has excited many as the young playmaker’s talents will be given plenty of opportunity.

"It's a challenge, and I'm looking forward to it," McKenzie said.

"As a driver, I want to be in the game as much as possible, so it's about creating opportunities for other people around me and just making sure I'm in control and driving the team around the park where it needs to be.

"It's different, but that's not to say I'm going to chuck everything I know out the window and go to be a robotic player. I've still got to play my game."

While the All Blacks were dominant in every facet of the match last week, they underestimate the Pumas at their peril. It was just over a year ago that the South Americans sprung a surprise on the All Blacks in Australia, tasting victory for the first time against the rugby giants.

However, All Black captain Ardie Savea is well aware of the dangers of complacency when taking on Julian Montoya and co.

"What they did last week was pretty special, but for us, even though there have been changes, it's about backing them up,” Savea said.

“If we turn up thinking the same performance as last week will be enough, then we're kidding ourselves. We know the Argie boys are wounded beasts, so they're dangerous right now.

"The boys know what is expected of them, in terms of nailing their role, and doing their jobs. I'm a big words of affirmation dude, so I just like to encourage in small ways and remind the boys that they're here for a reason.

"I'm really looking forward to the guys that are getting the opportunity this week to go out there and perform."

When Mario Ledesma read out his squad for this return clash, he was met with some raised eyebrows after some intriguing selections.

Pablo Matera starts in the number 8 jersey – for the first time in his career – in place of Bruni Rodrigo while the injured Nicolas Sanchez (flyhalf) is replaced by Santiago Carreras – a winger. 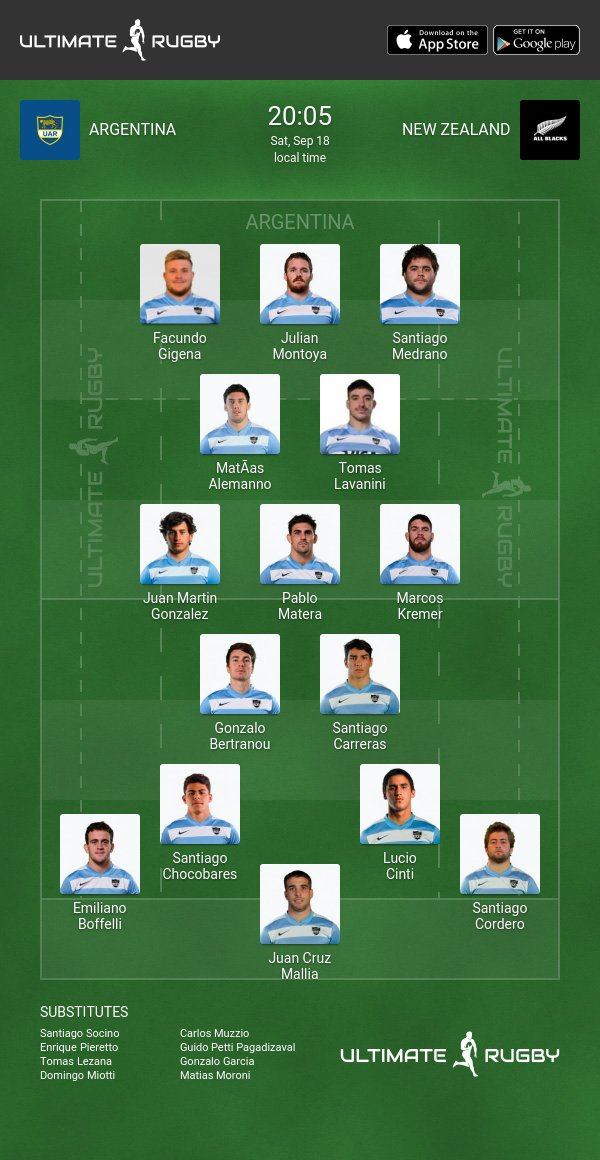 The Pumas are, in effect, playing against a new All Black team this weekend and thus have an opportunity to redeem the result from last weekend as some unsettled combinations amongst the men in black may be exploited and yield a few points. However, even though it may be called something of a second-string All Black team, it is still a formidable one, and the Pumas are guaranteed a tough task ahead.

● New Zealand have kept Argentina scoreless in each of their last two meetings in men’s Tests; only twice since 1900 has any Tier 1 nation kept another Tier 1 nation scoreless for more consecutive games (England – 4 games vs Ireland from 1956 to 1959; France – 3 games vs Italy from 1959 to 1961).

● Argentina have lost three consecutive men’s Tests heading into this fixture after having lost only twice in their 10 Tests prior to that run (W5, D3); the last time they lost more in succession was a 10-game streak from September 2018 to September 2019.

● No player has made more tackles than Argentinian duo Gonzalo Bertanou (41/45) and Julian Montoya (40/40) in the 2021 edition of The Rugby Championship; in fact, Montoya has missed only one of his last 84 tackle attempts in Test rugby.

● Akira Ioane (New Zealand) has beaten 17 defenders in The Rugby Championship in 2021, six more than any other player in the competition; he has also made five clean breaks and two try assists in the campaign so far.

The Wallabies enjoyed a cocktail of positive emotion at the conclusion of their Test victory over the Springboks last weekend.

Coming off the back of three consecutive defeats to the All Blacks, Michael Hooper and co. Were desperate to finish the game on the right side of the scoreboard, which they did – courtesy of a last-minute penalty by flyhlaf Quade Cooper – something of a fairytale story for the 33 year-old who, many thought, would never play for Australia again since last turning out for them in 2016.

It was a stout showing by the men in gold, who had the courage to take the Boks on up front and stifled their rhythm. With three weeks of no game-time, the Boks were not at their sharpest while their opposition were about as battle-hardened as a team can be and Pollard’s off day with the boot did not help the South Africans’ cause.

There was an air of determination around Springbok captain Siya Kolisi following the match, however.

“We watched the game again, and immediately knew where we went wrong,” he said. “It was very upsetting to lose that game, especially looking at the mistakes we made, which was difficult to see. But we are more determined than ever this week, we have really worked hard and individually we sat and looked closely at the simple errors we made.

“We also have to give credit to Australia, because they played really well, but we can be much better this Saturday, and we will.

“I just think on the day, we weren’t at our best in terms of the standards we hold ourselves too, with 21 missed tackles, and we had less dominant tackles, so it was one of our poorest defensive games we’ve had. You can sit as an individual player, and it’s clear to see, you don’t need the coaches to tell you.

“You know as a player, and how you measure yourself. Personally I could look and say ‘that wasn’t me at all’, so that’s what made it easier to review the game, because I compared myself to how I was against Argentina, and the British & Irish Lions, and the standard was not the same. So we want to get back to that level before we look at anything else or complain about anything else.”

Meanwhile, Wallaby captain Michael Hooper is set to reach a huge milestone as he will break George Gregan’s captaincy record when he takes the field on Saturday.

“It’s an incredible milestone for Hoops on Saturday evening in Brisbane and it’s a testament to him as a person and a player," Said Australia coach, Dave Rennie.

“I’ve been so impressed with his leadership both on and off the field and his drive to be better every day.

“We were really proud of the effort from our men last Sunday and we’re well aware of the ferocity that a wounded Springboks outfit will bring to Suncorp Stadium.” 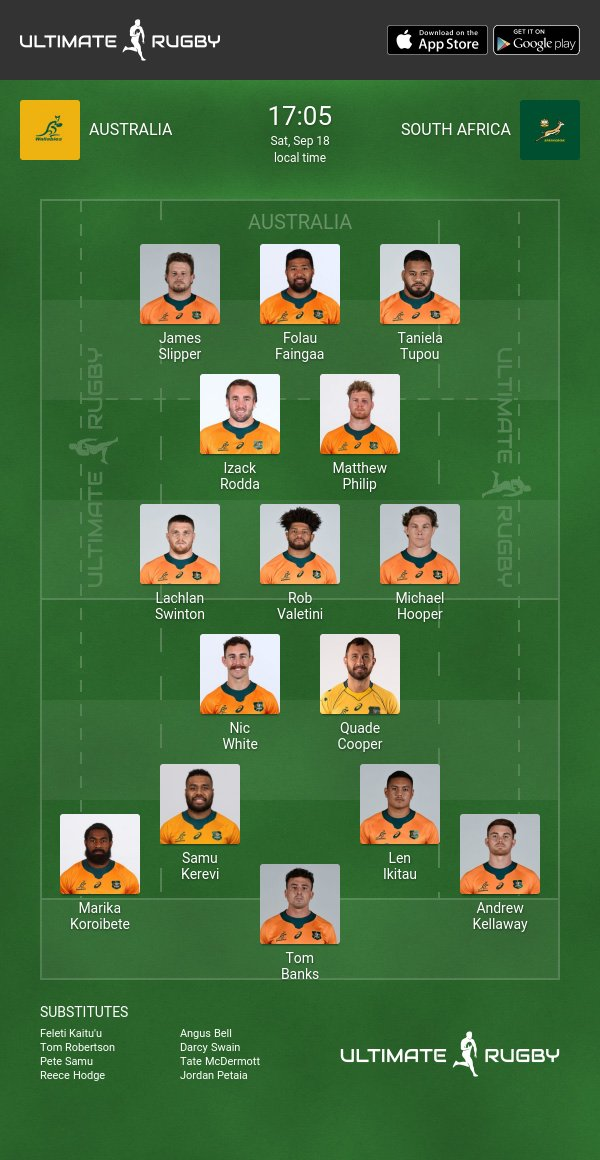 Rennie is right; the Boks will be a tougher task this weekend as they look to avenge their most recent defeat and will most likely be quicker starters than last weekend.

In naming his team, Springbok coach Jacques Nienaber opted for continuity, making only three changes to his matchday squad – one of which was enforced – as the Boks aim to bounce back from last weekend’s defeat to the Wallabies. 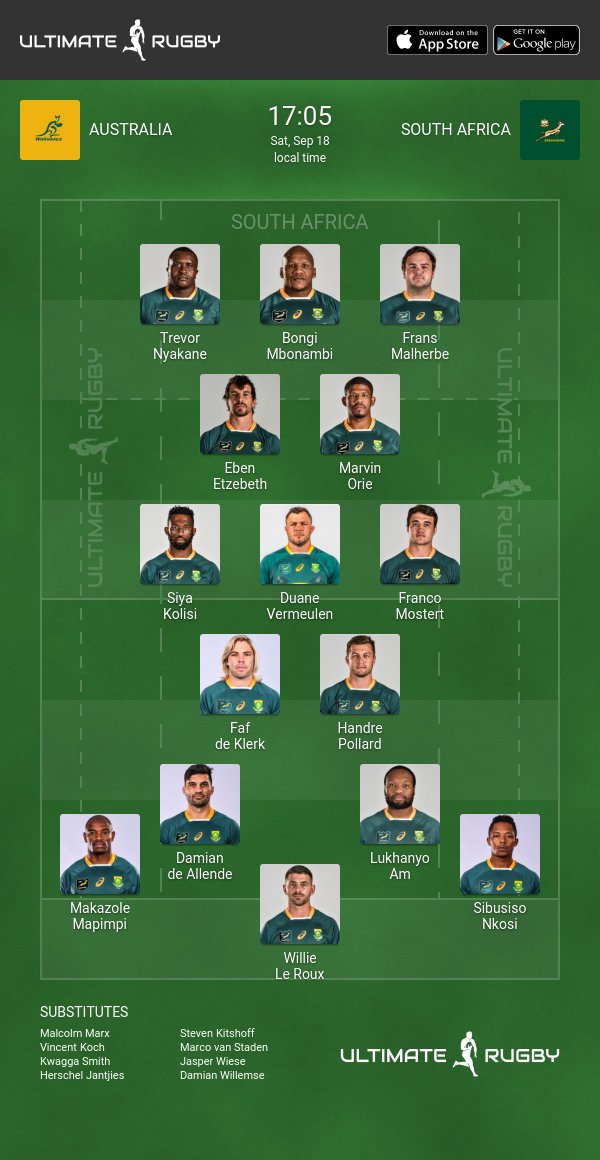 In the two personnel changes in the starting lineup, Marvin Orie takes over at lock from Lood de Jager, who has started his concussion return to play protocol, and Trevor Nyakane was named at loosehead prop, with Steven Kitshoff named amongst the replacements in place of Ox Nché.

Nyakane, who boasts 48 Test caps, and Orie last ran out for the Springboks in the team’s second Test against Argentina in Nelson Mandela Bay a little over three weeks ago – and with the set pieces and contact points expected to be key areas of the game, they will look to make their presence felt.

Nienaber again opted for a six-two split of forwards on the bench where Marco van Staden, Kwagga Smith and Jasper Wiese will add impetus along with the front row of Kitshoff, Malcolm Marx and Vincent Koch, while Herschel Jantjies and Damian Willemse will provide cover in the backline.

South Africa and Australia have met in men’s Tests nine times since the beginning of 2015, with those games decided by an average margin of six points per game; the Wallabies have picked up four wins and two draws in that stretch (L3).

● This will be the first time that Australia have faced South Africa twice within a span of eight days since September 2010; the Wallabies have won their last two Tests against the Springboks when they’ve had a turnaround of fewer than 14 days.

● South Africa have conceded just 13 points in the final quarters of games thus far in the 2021 edition of The Rugby Championship, fewer than any other team in the competition; however, Australia have scored more points in this quarter (27) than they have in any other.

● Lood De Jager (South Africa) has won a competition-high 22 lineouts in The Rugby Championship in 2021, including three lineout steals; no other player has won more than 13 lineouts this campaign.