France missed the opening round of the Autumn Nations Cup with their clash against Fiji cancelled due to a COVID-19 outbreak in the Fiji squad and will now kick off their campaign against Scotland in Murrayfield on Sunday.

Fabien Galthie has made a number of changes to the side that beat Ireland 35-27 in the final round of the Six Nations with Matthieu Jalibert the notable change at flyhalf with Romain Ntamack ruled out through injury. He starts alongside Antoine Dupont who holds onto the starting jumper.

A return to fitness for Teddy Thomas sees him take a place on the wing with Gael Fickou moving back into the centres and Arthur Vincent dropping to the bench. Virimi Vakatawa continues in the #13 jersey with Vincent Rattez moving back to the left-wing. Anthony Bouthier missing the clash with Scotland through injury and is replaced by Thomas Ramos who moves in from the bench.

Galthie has rotated the front row with the starters against Ireland (Cyril Baille, Julien Marchand and Mohamed Haouas) all dropping to the bench with Jean-Baptiste Gros, Camille Chat and Demba Bamba coming into the starting line up from the bench. Bernard Le Roux starts in the #4 jersey with his second-row partner against Ireland, Paul Willemse, dropping to the bench with Romain Taofifenua elevated to the starting line up.

Dylan Cretin replaces the injured Francois Cros in the starting XV alongside captain Charles Ollivon with Gregory Alldritt packing down at no.8. Cameron Woki has been added to the bench along with Baptiste Couilloud who earns his first recall since 2018. Finally, Toulon flyhalf and former France u20 captain Louis Carbonel could make his debut via the bench. 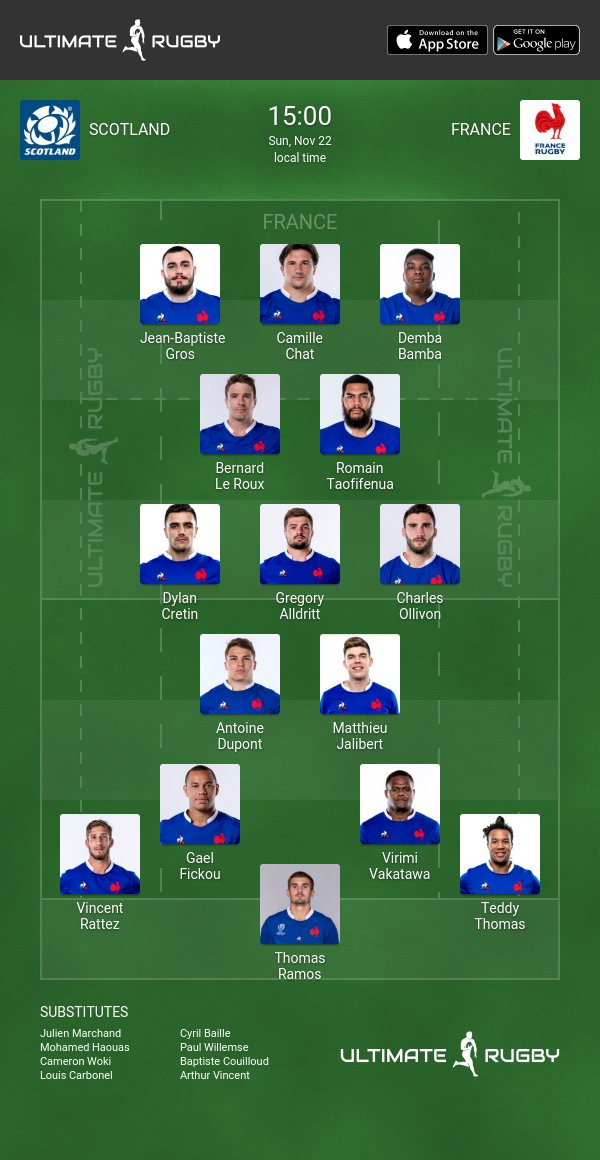