Australia began their HSBC World Rugby Sevens Series title defence on a winning note as they claimed an unprecedented hat-trick of Emirates Dubai 7s titles with a 26-19 victory against their closest rivals New Zealand. Meanwhile, South Africa’s men made it four Dubai titles in a row with a 21-5 win against Ireland 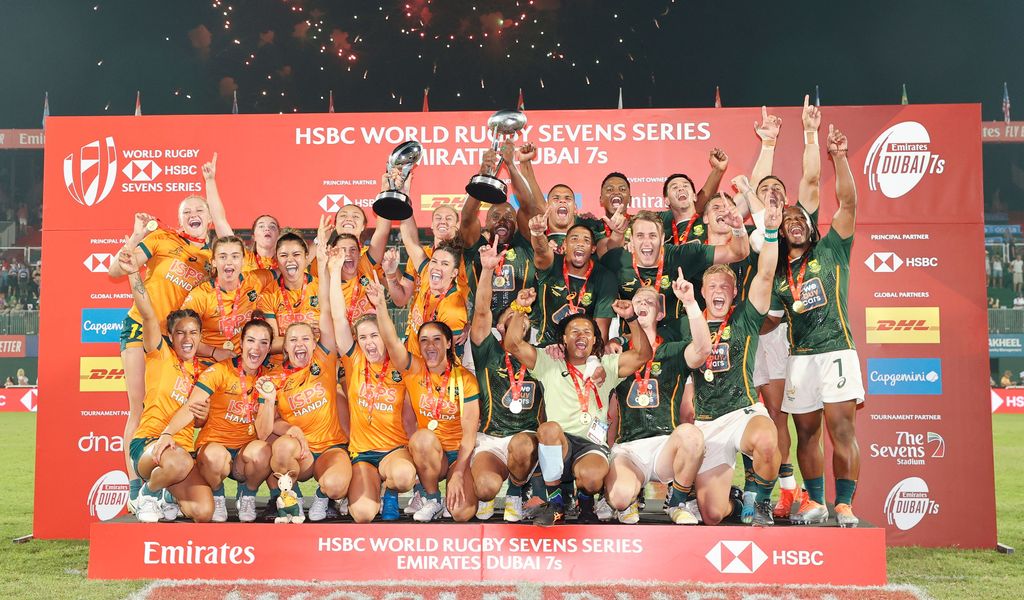 Australia began their HSBC World Rugby Sevens Series title defence on a winning note as they claimed an unprecedented hat-trick of Emirates Dubai 7s titles with a 26-19 victory against their closest rivals New Zealand.

Meanwhile, South Africa’s men made it four Dubai titles in a row with a 21-5 win against Ireland underlining their dominance in the desert. Having missed out on the medals in the first tournament of the World Series in Hong Kong last month, it was a timely response from the Blitzboks with qualification for the Paris 2024 Olympic Games determined by the standings at the season's end and heading in to the HSBC Cape Town Sevens next week.

In the bronze medal matches, it was one win and one defeat for the USA, who lost to New Zealand in the men’s competition but saw off France in the women’s.

Fiji’s men, runners-up in Hong Kong a month ago, could only finish ninth and are currently outside of the top four places guaranteed to secure teams' automatic entry to the Paris extravaganza, although with nine rounds left to play there is still plenty of time for them to make up lost ground.

For Australia’s women, the Dubai tournament saw a continuation of the form that took them to not only the World Series crown but also the Commonwealth Games and Rugby World Cup Sevens gold medals.

“Our coaches say we are queens of the desert, we thrive off heat, so for us, it was just a golden win,” said player of the final, Madison Ashby.

It was the 19th World Series Cup final between Australia and New Zealand with the Black Ferns Sevens looking to tip the balance back in their favour after being on the wrong side of recent results.

Michaela Blyde had a steely-eyed look about her during the national anthems and she was right up for the occasion but her hat-trick was in vain as all-conquering Australia celebrated yet another trophy.

Putting on a performance of pace and power, Australia always had the edge over their fiercest rivals and tries from Sharni Williams, who also kicked three conversions, Faith Nathan, Maddison Levi and Demi Hayes saw them home.

Levi’s try in the final took her to the top of the all-time Dubai try-scorers chart, on 11.

Australia women’s co-captain Charlotte Caslick said: “It’s awesome to start the new Series with a win to back up our form from last year when we had a great season. We had a hard pre-season and came out to defend our title. We spoke about being the team that is getting chased now and for us it’s just about continuing to get better and not becoming complacent.

“We love playing in Dubai, in front of this incredible crowd. People have so much fun and that really translates to us on the field. We’ll recover now, have a relaxed week getting in to Cape Town and we’re really looking forward to playing there again. The girls loved Cape Town for the World Cup so it’s going to be fun playing there again.”

In the men’s final, Ireland were no match for defending champions South Africa in what was only their second Cup final.

South Africa were beaten by Great Britain in their opening match on day one and had to come from behind in the quarter-final and semi-final, having left it late to qualify for the Cup knockout stages in the first place, before taking centre stage in front of a full house at The Sevens Stadium.

However, the final against Ireland was a much more comfortable affair, the Blitzboks easing to a 21-5 win after scoring three converted tries before the break.

Player of the match, Shilton van Wyk side-stepped his way through the Ireland defensive line and sped away to score within 20 seconds of the first whistle and then added another before a Siviwe Soyizwapi intercept left Ireland with it all to do.

An Ireland comeback never really materialised due to South Africa’s vaster experience at this level and astute game management and Jack Kelly’s try on 11 minutes was scant consolation.

South Africa men’s captain Siviwe Soyizwapi said: “This win is a feeling I can't put into words. I think we really worked hard to be where we are today. And it's been tough. It's been hard to get back on the podium. It's really amazing and we have Cape Town coming next week. I think we can take so much confidence from this win in Dubai. We are excited, It's been great preparation for next week. However, there's still so much more that we can work on in our game, both on attack and in defence. So we'll have a look at the footage and see where we can get better.

“The team spirit is amazing. It's a great balance between experienced guys and the youth. The youth being so much energy and I think that's the beauty of the balance because sometimes you have to turn it down and sometimes you allow it to go through the roof so it's really special. And it's great to have new coaches, great ideas and style that is expressed. We want to see Cape Town Stadium full next weekend so get your tickets and come support us.”

South Africa and Australia are joint leaders of the men’s Series with 32 points after two rounds, the first of which was won by reigning Series title holders Australia in Hong Kong last month. France and Ireland are currently third and fourth on 30 and 29 points respectively.

At the other end of the table in the men’s competition the number of teams for the next edition of the Series will reduce from 16 to 12 to equal the number of women’s teams and align with the Olympic competition structure, meaning fans can expect an intense battle to avoid relegation throughout the 2023 Series with every match and every point counting towards the final Series rankings.

All men’s and women’s teams move on to the HSBC Cape Town Sevens on 9-11 December as the race for Series glory and Paris 2024 Olympic qualification continues in what promises to be another blockbuster event in the iconic Cape Town Stadium.

The men’s pool draw for Cape Town sees hosts South Africa in pool A together with France, Fiji and Canada. Pool B includes Ireland, Samoa, Uruguay and Japan. New Zealand are in Pool C alongside Argentina, Kenya and Spain while the USA, Australia, Great Britain and Uganda are in Pool D.

The women’s pools in Cape Town have all-conquering Australia drawn with Ireland, Spain and South Africa in Pool A. New Zealand are in Pool B together with Fiji, Great Britain and Brazil. Pool C includes the USA, France, Canada and Japan.