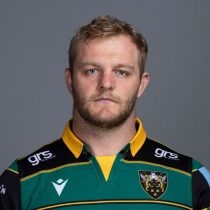 Over the course of the few seasons Mike Haywood has quickly shown that he is far more than a young stand-in for the experienced Dylan Hartley in the Saints front row.

Haywood first made his way into the Wanderers team during the 2010/11 season, a year in which he secured a Six Nations Grand Slam with England Under-20s, and after signing a first-team contract at the end of that campaign he has gone from strength to strength at Franklin’s Gardens.

He played a major part in some of the club's biggest wins in recent times, including starting the 2014 Aviva Premiership and European Challenge Cup finals, the epic Aviva Premiership semi-final win over Leicester, and the win at Ravenhill that ended Ulster's long-time European Cup home record.

In addition to domestic and European success with the Saints, Mike has also experienced success internationally. The dynamic and tenacious front row was a member of the 2011 England Under-20 squad that secured five wins en route to a Six Nations Grand Slam, starting four of their matches.

In the summer of 2016 Haywood was named in the Premiership Dream Team after a string of impressive performances in the 2015/16 season. final.

The hooker then became Saints' top try-scorer the following campaign, scoring eight tries in 29 appearances that year, and played almost every game of the 2017/18 season – scoring an outstanding try against Harlequins which was nominated for the league’s Try of the Season.


During the 2019/20 season, Haywood earned his 200th appearance for Saints. He also has accumulated over 40 European caps.