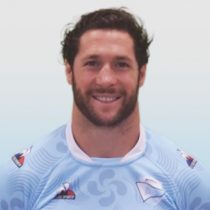 The scrum-half began his professional career at Bordeaux Bengles in the D2 before moving to Agen in 2010. As his form improved and he showed his agility, ball-handling and decisiveness at the top level he moved to Racing Metro.

It was here that he showed up on the international radar and he made his debut for the French national side against Argentina in 2012.

The France duo of Morgan Parra and Dimitri Yachvili made it difficult for Maxime Machenaud to rack up the test caps for France.

However strong performance in the 2016 Six Nations lead to him being included in the November Test squad late that year.

In 2017 he was included in the France Six Nations squad.

In June of the same year, Machenaud signed a new deal with Racing 92 until 2020.

He featured in all 5 of France's 2018 Six Nations matches taking his test tally to 36.

The halfback' placekicking was crucial to Racing 92's 2017/18 season as they made their way to the Champions Cup.

His performances led to him being nominated for the EPCR Player of the Year but an injury serious injury ended his season prematurely ultimately ruling him out of the final as well as France's tour to New Zealand.