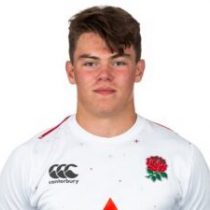 Brentwood born Louis Hillman-Cooper began his rugby journey at Wymondham Rugby Club, before moving on to Cheltenham College in 2017.

Hillman-Cooper joined the Gloucester Rugby Academy aged 16 and made his England U18 debut against Scotland in March 2019, also playing against France a week later.

The versatile player was added to the England U20s squad ahead of the 2021 U20s Six Nations.