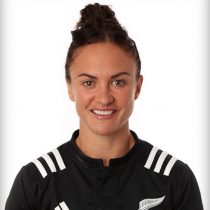 Les Elder career has seen two distinct phases. As a teenager, Elder (nee Ketu) played 10 games for Waikato in 2004-05, before moving back to netball.

In 2009 Elder moved to Australia where she got back into rugby, developing her game for three years before returning to New Zealand in 2013.

The strong loose forward made a good impression for Waikato in her comeback, cracking the Black Ferns in 2015 at the age of 28 for the Women’s Super Series in Canada.

The following year during an Farah Palmer Cup match Elder was stretchered off the field in what could have been a career-ending injury.

Determined to make the 2017 Women’s Rugby World Cup side she fought her way back into Glenn Moore’s squad through sheer determination and hard work.

Elder is an uncompromising player, tough and resilient on and off the field.

She is a natural leader, calm under pressure and has been named the captain of the Black Ferns for the first time in 2019