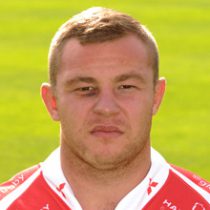 Hailing from the town of Torquay, England, Britton is an industrious hooker with an appetite for ball-carrying. At over 16 stone and just a tad under 6 foot, Britton is an imposing figure on the paddock and has represented England at underage level.

Koree was born in Torquay and started his rugby career young at just the age of 4 when he played for Dartmouth minis.

Koree has also played for Wasps, London Welsh, England U20's and Northampton Saints. In August 2017, he signed for Brixham RFC.