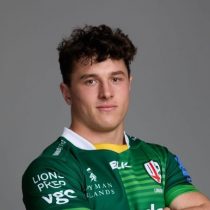 He was a standout performer for the England u20s, Henry Arundell shot into the limelight after scoring an incredible solo try against Toulon during the 2021/22 Challenge Cup.

The 2021/22 season was a breakout one for Arundell at London Irish with his 11 tries in 17 appearances Exiles and England under-20s earning him the Land Rover Discovery of the Season.

Eligible to represent Scotland and Wales, Arundell earned a test call-up for England ahead of the three-test tour to Australia.