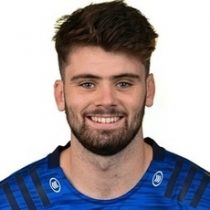 Highly rated from a young age, Harry Byrne shone at St Michael’s College, Dublin and featured for the Ireland u20s in 2018 despite being a year younger than most of his team-mates.

He was also fast-tracked into the Leinster sub-Academy due to his potential. Byrne returned to the U20 fold in 2019 and started the first four games of Ireland’s Grand Slam before he was sidelined through injury for the final fixture against Wales, subsequently missing the u20 Championship with a hip issue.

He made up for lost time in 2019 with a senior Leinster debut off the bench against Benetton in September 2019 and then a first professional start at out-half that November against the Dragons having also been named in Leinster's Champions Cup squad in October.

A confident and composed young player, Harry is the younger brother of Irish International Ross who also plays outhalf. Not afraid to attack the opposition with ball in hand, Byrne is also gifted with an accurate boot and has the potential to develop into a genuine triple threat of run/kick/pass in attack.

Byrne was named in Ireland's Six Nations squad ahead of the 2020 tournament as he joined the squad as a 'development player. Having yet to make a test debut, Bryne was called into the Ireland squad during the 2021 Six Nations as injury cover.

In June 2021, Byrne made his test debut off the bench for Ireland against USA.