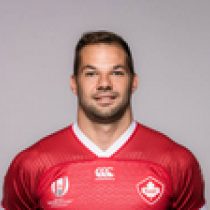 A man of many nicknames, Gordon McRorie is a reliable goalkicking scrumhalf who regularly slots regular kicks for his club and country.

McRorie is a calm presence at the base of Canada's rucks and made his test debut in June 2014 against Japan and has since going on to nail down the number nine jersey for Canada.

Not only an organisational leader in the squad, McCrorie has an eye for a gap and provides a definite try-scoring threat from the back of the scrum.

His strong showings in the 9 jersey for his country in 2014 led to his inclusion in the Canada squad for the 2015 Rugby World Cup.

McRorie made 3 appearances at the 2015 Rugby World Cup and has since racked up 38 appearances for Canada, 28 in the starting line up and has scored 275 points ahead of the 2019 Pacific Nations Cup.