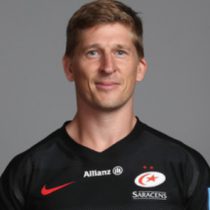 The flying wing has serious pace to burn and was earmarked to be a star from early on.

The multi-talented sportsman was initially leaning towards rugby league, although he also had football trials with Liverpool, Manchester City and Everton. However, it was rugby union that captured his talent and he has cross the try-line on many occasions for Harlequins, Saracens and England.


Strettle returned to Allianz Park for the 2018 season, three years after leaving for Clermont Auvergne, where he was crowned the club’s top try-scorer in 2015/16 and 2016/17 and also helped them to win the French Top 14 title last season.

In April 2019, having made over 325 appearances at club level as well as earning 14 caps on the international stage for England, Strettle announced that he would retire at the end of the 2018/19 season.