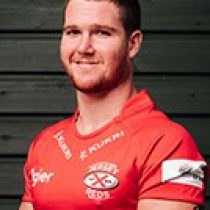 He scored two tries in the 2017/18 season and became a top points scorer in the British & Irish Cup.

He scored 12 of the Reds 27 points in their heart breaking British & Irish Cup semi final loss at home to Leinster A in April 2018.

Cope signed a contract with Yorkshire Carnegie to bolster their back line for the 2018/19 season.