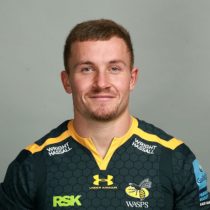 A former pupil of Ivybridge College, he also represented Devon at under-15 and under-18 levels and was a member of both Exeter Chiefs and Worcester Warriors academies.

Vellacott has played for Scotland at U17 and U18 levels and made his Scotland under-20 debut off the bench against Ireland in January 2014, scoring his side's only try, in the final minutes.

Vellacott qualifies for Scotland through his mother, who hails from Peterhead, and played for them at Under-17, U18 and U20 level, including at the 2015 Junior World Championship in Italy.

After heading to Hartpury College, Ben fell in love with the game and helped their rise to the Championship and joined Gloucester's senior academy in 2016

During his time at Kingsholm, he ran in 14 tries in 49 appearances.

The livewire nine first pulled on Wasps colours for the first time at the 2019 Premiership 7s, helping his side reach the final of the tournament for a sixth successive time, but an unfortunate ACL injury ruled him out of action for six months of the season