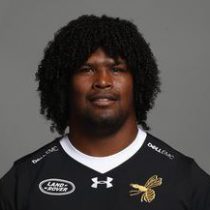 Born in Wynberg, Cape Town South Africa, Johnson is a powerful no.8 with a huge appetite for ball carrying.

Having graduated from the famous rugby breeding ground of Paarl Gymnasium, Johnson made his professional debut for the Cheetahs in 2007 before making his first Super Rugby appearance aged 24 in 2010.
He made 35 Super Rugby and 63 provincial appearances.

In the summer of 2012, Johnson moved to England to link up with London Wasps in the English Premiership. The rampaging 8 has turned out for the Springboks on their outgoing tour in 2009, where he managed 3 caps.

The popular South African has become Dai Young’s go-to forward, with nearly 200 appearances. His ability to perform to a consistently high level at either flanker or hooker offers his boss the wide range of flexibility.

In June 2020, Johnson announced he would be leaving Wasps after 8 years and a massive 198 caps for the club.