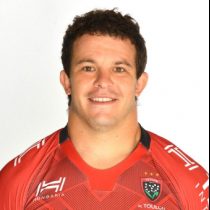 Anthony Etrillard came through the ranks at Bayonne and broke into the senior side in 2012.

Accurate, powerful and hard-working, Etrillard became a regular at Bayonne before the club got relegated in 2015. Following their relegation, he signed a deal to join Top 14 giants Toulon.

His first two seasons with the club saw the club finish as runners-up in the Top 14.

Since arriving at the club he has gone on to earn over 100 appearances for the club and earned a call up to the French Barbarians who traveled to South Africa.

He is currently contracted with the club until 2024 and in January 2020 he was called up to France's Six Nations squad where he looked to make his test debut.

Unfortunately for Etrillard, he broke his leg in Toulon's Challenge Cup clash with Scarlets ruling him out of the Six Nations.

He went into the 2020 Top 14 season having made 110 appearances for the French giants, scoring 20 points.