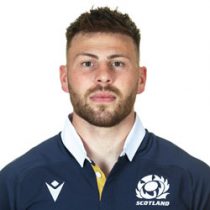 Born in Kings Lynn, England and qualifies for Scotland selection through his mother, representing Scotland at under-20 level. The former Bedford Blue arrived at Scotstoun during the 2013-14 season and progressed through the academy system and, after being awarded short-term professional terms in December.

A two-time winner of the McCrea Financial Services Player of the Season prize – in 2016/17 and 2018/19 -, Price made his debut for Glasgow Warriors in a November 2014 clash against the Scarlets.

Price's form earned him a test call up for the Autumn Tests and made his test debut against Georgia in 2016 before going on to win four more caps in the 2017 Six Nations Championship. His rapid rise is reflected in the fact
that it was only in 2017 that he won the vote as Glasgow's Most Improved Player.

In May 2017, Price was awarded with Glasgow's Player of the Season and named in the Scotland squad for their three-Test summer tour. While notching his first international try against Italy in Singapore later that year, Price continued to impress back on domestic duty, helping Warriors to a first European Champions Cup quarter-final en route to being named the club’s 2016/17 Player of the Season.

Price featured in each of Scotland’s 2020 and 2021 Six Nations clashes, helping Gregor Townsend’s men to wins at Twickenham and in Paris in the latter – the first time they had achieved this feat in a single Championship since 1926.

In December 2021, notched up his 100th appearance for Glasgow Warriors against La Rochelle. The scrumhalf signed a new contract with the side extending his stay at Scotstoun.

Price took his test cap tally to 49 during the 2021 Autumn Nations Series. He has represented Scotland 46 times and the Lions three times.