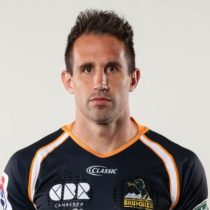 Originally from Sydney’s northern suburbs, Smith is a former Australian Sevens and U19’s representative and brings extensive experience and poise to the Brumbies potent backline.

Making him even harder to defend is Smith’s world-class ability to read the game, with the outside centre always looking for avenues to exploit a defender on the back foot or a big forward out of position.

After five caps in his debut season and 10 in 2011, Smith appeared in every game of 2012, starting in 15 fixtures and playing more minutes than any other Brumbies back.

Having been impressed with his form on tour and keen to utilise the skills he learned as an Australian Sevens player in 2003 and 2004, Brumbies coaching staff offered Smith a two year deal in Canberra which he accepted until the end of the 2013 season.

Smith joined Montpellier Rugby on a short-term deal running until 31 October 2015 to provide cover for the senior team during the 2015 Rugby World Cup.

On 1st May 2014, Munster Rugby confirmed the signing of Smith on a one-year deal. Smith impressed for the Irish province, scoring five tries and helping the side to a second place finish on the Pro12 table and a Grand Final berth.

On 1 October 2015, it was announced that Smith will re-join the Brumbies for the 2016 and 2017 Super Rugby seasons, having signed a two-year contract.

In August 2017, the Brumbies announced the re-signing of the utility back for the 2018 Super Rugby season.

A hard runner with a strong defensive pedigree, Smith continued to add experience and versatility to an already sharp Brumbies backline in 2018 with his 65 Super Rugby caps before leaving the side ahead of the 2019 Super Rugby season.