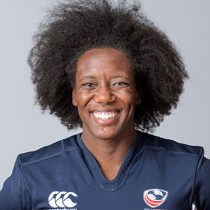 Alycia Washington began playing rugby at the age of 17. As a multi-sport athlete, she ran track and field for four years, participated in gymnastics for seven years and completed two years of field hockey.

As a two-time Junior All-American (2009 & 2011) and a two time Collegiate All-American (2011 & 2012) from the University of Connecticut, Washington excelled in the rugby environment.

In June of 2015, she earned her first cap with the U.S. Women's National Team 15s against England and went on to win a Women's Premier League Championship two years later with New York Rugby.

That same year, Washington earned a selection for Women's Rugby World Cup 2017 where she helped the Eagles finish in fourth-place, their highest since 1991.

One of her favorite athlete's to watch of any sport is her uncle, Scott Burrell, who helped the Chicago Bulls win an NBA Championship in 1998.

Washington owns a Bachelor's Degree in Psychology and Masters Degree in Sport Management.