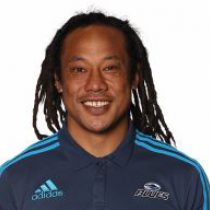 Tana Umaga is an ex-New Zealand and Hurricanes centre and wing, who was known for his physicality and try scoring ability. Umaga represented the junior Kiwi side in 1991 and earned his call-up to the Hurricanes squad after out scoring all of his teammates in the Wellington Lions team for three consecutive seasons.

In his second season with the Hurricanes Umaga set a then record, 12, for the most tries in one season by a New Zealander. In the same season he earned his maiden call up to the New Zealand nation team, after Jonah Lomu was ruled out through illness.

Due to a drop in form and the return of Jonah Lomu, Umaga was dropped from the All Black side. In 2000 with new coach Wayne Smith, Tana became a regular wing for the All Blacks and the following year he would shift his focus to becoming a centre.

Umaga become a crucial part of the All Black's team and captained the side in 2004 and 2005. He flourished in the centre role and was a nominated for the IRB Player of the Year award in 2005, which was won by Dan Carter.

In January 2006 Umaga announced his retirement from international rugby having played 74 Test for the All Black scoring 36 tries, Richie McCaw succeeded him as captain.

Umaga started his coaching career in 2008 at Toulon, a post that only lasted for one season. In 2010 he was Assistant Coach for Counties Manukau and later took over as Head Coach in 2012. He would continue as the Counties Manukau coach until 2015, when he was the Assistant Coach of the New Zealand U20. In 2016 he was took over the Head Coach position from Sir John Kirwin, following his resignation.

He then stepped into the defence coaching role for a two-year deal in 2019 before his contract was extended in September 2020 until the end of the 2021 Super Rugby season.