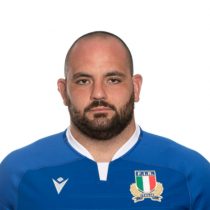 The front-rower impressed early during his time at the club and earned a spot in Italy's November Test squad in 2016. The then 23-year-old made his Test debut for Italy against South Africa in Firenze.

The powerful tighthead played 19 times for the club during the 2016/17 season and made 13 appearances for the club by January 2018 and was included in Italy's 2018 Six Nations squad.

Ferrari went into the 2019 Six Nations having had 5 previous appearances in the tournament.

As of December 2019, he has made 53 appearances for Benetton and has scored 5 points.