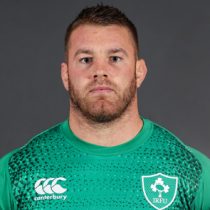 The rampaging back-row and former Tullow Community School player was part of the Ireland Under-20 side that won the Grand Slam in 2007. Every known accolade has been used to describe Sean O’Brien, but quite simply: he is the most destructive open field runner in the Northern Hemisphere.

Quick and strong in equal measures, O’Brien’s style of play has won plaudits all over Europe and saw him win the 2011 ERC European Player of the Year award. He made his Leinster debut in late 2008.

His Leinster form was nothing short of phenomenal and it came as no surprise when he was selected to make his Ireland debut against Fiji in 2009. Since making his debut in late 2009, O’Brien has been an integral part of the Irish Senior squad and was one of Ireland’s better players during the 2011 World Cup. Champions Cup winner with Leinster in 2011 & 2012 scoring a try in a man of the match winning performance against Ulster; added a Challenge Cup title in 2013 and a Pro 12 final winner in 2014.

One of the most devastating forward carriers in European rugby, the ERC Player of the year in 2011 showed the Aussies how he came to be nicknamed the "Tullow Tank" when he toured with the Lions in 2013, when he was involved from the start of the crucial third test, which the Lions won to secure a first tour victory since 2001.

Dogged by injury for the duration of the 2014/15 season, O'Brien successfully recovered to be named in the Ireland squad for the 2015 World Cup. To date, he has nearly 100 caps for Leinster to go along with his 41 Irish caps. In December 2015 he announced that he will stay at Leinster until after the 2019 RWC.

May 2016 saw him being ruled out of Ireland's summer tour to South Africa as he had to undergo surgery. Following a return from injury, O'Brien came back in time to be named in the Ireland squad for the November Internationals despite missing the win over NZ in Chicago. O'Brien displayed one of his best performances in a green shirt in the reverse fixture against NZ at the Aviva, making up for lost time due to numerous injuries.


In February 2019, London Irish confirmed that Sean O'Brien would be joining the club after the World Cup in Japan.

At the end of the 2019/19 season, O'Brien has represented Ireland 56 times, been on 2 Lions Tours (11 appearances), represented Leinster 126 times and won 4 Champions Cup and PRO14 titles.

ERC European Player of the Year 2011