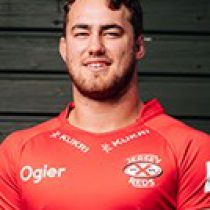 Hailing from Hilton, Argyle attended John Port School and has a law degree from Sheffield University.

He was part of Derby’s Midlands One East title-winning squad in 2012 before leaving to join National League Two North outfit Sheffield Tigers.

It was there that he was spotted by Rotherham, who handed him a one-year deal for the 2013-14 campaign.

Argyle, who plays in the back row, joined Derby when he was 13 and came through the Colts system, in the same side as Nottingham fly half Rory Lynn.