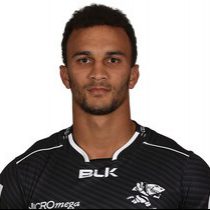 The Namibian-born Isaacs was selected to represent Namibia's Under–16 side at the 2009 Grant Khomo Week competition and in 2010 at the Under-18 Academy Week competition.

He then moved to Durban to join the Sharks Academy for the 2012 season.

Izaacs made his first senior appearances in 2014, playing in seven of the Sharks XV's matches during the 2014 Vodacom Cup. His debut came on 7 March 2014 against the Border Bulldogs in East London.