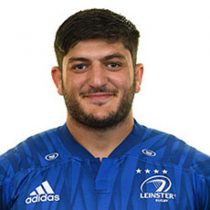 Vakh, an inside-centre turned tighthead prop, had a stellar 2015/16 season, breaking through in to the Clontarf Rugby first team setup.

Abdaladze moved to Ireland with his rugby-playing father & family and began his rugby journey at Coolmine RFC at the age of twelve.

He was selected in Nigel Carolan's Irish U20's squad for the 2016 Junior World Championship in Manchester.

At 21 the prop made his Leinster debut against Benetton Rugby in December during the 2017/18 PRO 14 season.

He had to wait until April 2018 for his next appearance this against Zebre where he came off the bench to score his first try for the Province.

Ahead of the 2019/20 season Abdaladze had made 7 Leinster appearances and a further 4 appearances before cementing his name in Leinster's squad for the 2019 Champions Cup, where he is set to make his first appearance at the tournament.