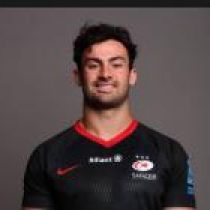 He joined the Saracens Academy aged 15, going on to make his first senior appearance in the 2016/17 Anglo-Welsh Cup against Scarlets before helping England Under-20s to the 2017 Six Nations title, playing in every match.

Morris, who furthered his experience with games for Ampthill and Bedford Blues, featured heavily in the 2018/19 Premiership Rugby Cup and Shield, and was a key component in Saracens getting to the final in the former and Storm winning the latter.

A powerful centre with the ability to break the gainline, Morris made six Premiership appearances for Saracens, crossing the whitewash four times before signing a new two-year deal in July 2020.