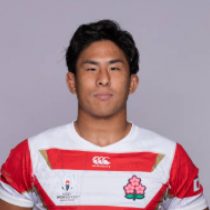 Kwansei Gakuin University graduate, Tokunaga was not only selected to play on the Japanese national team in the Under-19 Rugby World Championship, but also placed in the top four in the All-Japan High School Rugby Tournament.

After entering university, he was selected as a member of the Japanese national team in the World Rugby Under-20 Championship.

He was then selected as a member of the Japanese national men’s rugby sevens team for the 2016 Summer Olympics in Rio.

Following some impressive form, Tokunaga was named in Japan's 2017 squad for the June Internationals, where he will hope to add to his 4 caps.