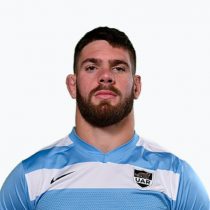 Having played rugby from a young age, representing Los Espinillos at the age of 15 and Club Salto Grande 16, he made his senior debut at Club Atlético del Rosario at the age of 17.

He became a regular starter at the club when he turned 18, starting in most matches in early 2016.

In January 2016, he was called up to the Argentina XV side ahead of the 2016 Americas Rugby Championship. He made his senior debut against the United States on 6 February 2016, before even making an appearance at any of the age-grade national teams.

A member of the Argentina U20 side, Kremer played in all the 2016 games and helped his side to a 3rd place finish in the Junior World Cup. He made a big name for himself and was soon playing Super Rugby with the Jaguares.

A big strong carrier he did not go unnoticed and was drafted into the Los Pumas squad for the Rugby Champions where he made his international debut against the All Blacks in New Zealand in 2016.

Kremer was named in the Argentinian squad for the November Tests and has played on nine occasions for his country.

He went into the 2018 Rugby Championship with 5 test caps.

After 24 appearances for the Jaguares in Super Rugby, Kremer signed a deal with Stade Francais ahead of the 2020 Top 14 season.