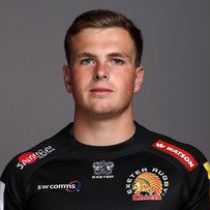 Growing up in Teignmouth, Simmonds came on Exeter’s radar when he followed his brother, Exeter flanker Sam, by joining Ivybridge College.

Despite two struggling seasons in the AASE League for Ivybridge, Simmonds caught the eye of the Exeter academy coaches and was offered a contract in the summer of 2015.

Simmonds has come through the club's academy system at Ivybridge Community College, and he's previously represented England at age group level, including the Under-20s in the Six Nations Championship.

The young fly-half emerged onto the big stage during the 2016/17 season, making his Exeter Chiefs debut in an Anglo-Welsh Cup tie at Harlequins.

Having started the season on dual-registered terms at National League One club Plymouth Albion, he would end the year having helped the Chiefs to reach not only the Anglo-Welsh Cup Final, but also the Aviva Premiership Final.

Exeter's Young Player of the Season 2019