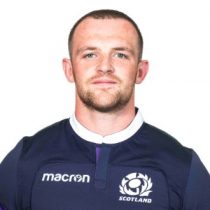 Grigg signed for Glasgow Warriors at the start of the 2015/16 season and made his full debut in a victory over Leinster on 18 March 2016.

He was chosen for the Scotland 7's in the World Rugby Seven Series in Wellington in 2015.

The powerful Kiwi-born centre made 62 appearances for the club since his debut in March 2017 and enjoyed a fine season with the Warriors.

Having advanced through the BT Sport Academy system to become an increasingly important part of Glasgow Warriors’ squad.

In October 2017, Nick signed a new contract at the club keeping him at the club until May 2020.

Grigg was voted the Players’ Player of the Season for his stand-out performances during the 2016/17 season and made his Scotland debut against Fiji on the summer tour in June.

He was named in Scotland's squad for the 2018 Six Nations tournament, where he looked to add to his 1 international cap.