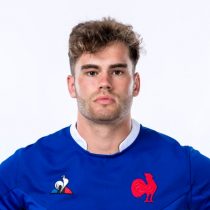 Son of former France international Alain Penaud, Damian started his professional career with Clermont when he joined the Academy side in 2014.

A very dangerous player with the ball in hand, Penaud represented the France U20s at the u20 Six Nations and the u20 World Cup in 2015 and 2016.

He became a regular starter for Clermont and helped the side to a victorious Top 14 campaign during the 2016/17 season, scoring a try in the semi-final and started the final.

He was named in the France national squad for the three-match series against South Africa in June 2017.

The centre immediately repaid Guy Noves’ faith in him with a try in that 37-15 in Durban, as he showcased his pace, impressive step, vision to spot a gap and confidence to back himself at the very highest level.

In September 2017, Penaud signed a new deal with Clermont until June 2021 having played 22 times for the club scoring 9 tries.

2020 saw him being named in France's squad for the Six Nations.