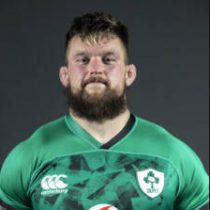 A former St. Andrew's College man, Porter made a name for himself with some impressive performances during the Leinster School's Senior Cup.

Porter featured in April 2015 when the Irish U19s secured a 13-10 win over their Gallic counterparts at the French union’s national training centre in Marcoussis.

He was an impressive performer on Ireland’s Junior World Cup team in 2015 in Italy.

He made Ireland's World Rugby Under 20 Championship squad for 2016, making the final of the competition, impressing with his ball-carrying abilities and dominance at scrum time.

The loosehead was a regular for the Leinster 'A' side before making his Leinster debut at the start of the 2016 campaign, coming on in the second half for Cian Healy against Treviso.

Porter has switched over to tighthead and strung together some impressive performances in the number three shirt for club side UCD.

The powerful prop has all the physical attributes to make it at tighthead but now must go through the difficult process of learning the technical side of the position.

Having impressed at Leinster and earned himself a senior contract for the 2017/2018 season, Porter made his Ireland debut after being named in the Ireland Summer Tour squad. He was on the winning side in each of his first 11 appearances for Ireland.

Impressive performances secured his spot in Ireland's 35-man squad for the 2018 Six Nations, He ended the tournament with 7 international caps.

Following the 2019 Rugby World Cup, he finished the tournament with 23 caps.

He went into the 2019 Champions Cup with 13 appearances in the tournament.

Porter was then named in Ireland's squad for the 2020 Six Nations with 23 caps.