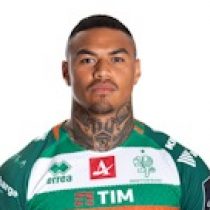 Nephew of Digby Ioane, Monty, is much like his uncle in the way he plays with his attacking ability and defensive work.

Ioane helped the Steelers to the Mitre 10 Cup championship final before joining Benneton in late 2017, having started his career at the age of 16 in Brisbane for Queensland Reds academy before he moved to Stade Francais along with his uncle Digby.

In November 2017, Monty signed for Benetton Rugby in Treviso, and after 10 appearances and 9 tries, he signed a new two-year deal with the club.

As of December 2019, he has made 35 appearances for Treviso and has scored 75 points.