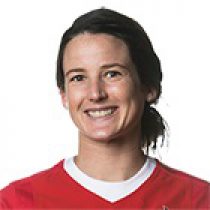 Elissa Alarie went to the Universite de Quebec a Trios-Rivieres. She made her debut for the National Sevens team in Hong Kong in 2013 and received her first Fifteens National Senior Women’s cap at
Nations Cup in 2013 where Canada won their first-ever Tournament Title.

Alarie also scored the game-winning try over USA in the finale of the two-game CAN-AM Series at Westhills Stadium in Langford, BC.