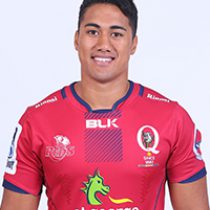 Taulagi has experienced a rapid rise after moving to Australia in June 2012 from New Zealand with his family as a 19-year-old.

Jamie-Jerry signed as a foreign development player ahead of the 2014 Super Rugby season, after lighting up Queensland Premier Rugby.

A knee injury suffered in 2015's Round 1 limited his involvement to just two Super Rugby games. He returned from injury during the back end of the BLK Queensland Premier Rugby season for University of Queensland, who finished third overall.

Jamie-Jerry again featured for Queensland Country in the second season of the National Rugby Championship but his season was cut short when he suffered a serious knee injury in Round 2 against the Sydney Stars.

He moved to Japan in 2016 to play for Munakata Sanix Blues in the Top League and later signed with the Sunwolves for the 2017 season.

Taulagi was selected in the Samoa national squad for their 2017 end-of-year tour. In England, he joined Devon club Newton Abbot RFC in a bid to win a contract with Exeter Chiefs for the 2017–18 season.