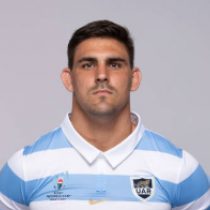 Matera was born in Buenos Aires and represented Argentina U20 in the 2012 & 2013 IRB Junior World Championship.

He made his senior debut against Chile in May 2013 and was named in the 2013 Rugby Championship squad where he played home & away against South Africa.

In October 2013, Leicester Tigers signed Matera on a short-term deal until the end of the season after a spell with Pampas XV.

He only made eight appearances for Tigers due to a combination of international call-ups, injuries and also his coach’s reluctance to throw him in the deep end of the Premiership.

Matera was called up to the 2014 Rugby Championship squad for Argentina and is a member of the 2015 RWC squad that reached the semi-finals.

He signed for Buenos-Aires based Jaguares for the 2016 Super Rugby campaign & played 12 times during the 2017 season.

He left Jaguares in 2019 having amassed 27 appearances for the Super Rugby side.

His next journey took him to France with Stade Francais in 2019.