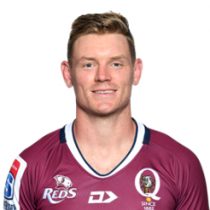 From a young age, Bryce warranted the attention of talent scouts from all codes, including AFL.

He eventually made the tough call of joining Rugby League, while still at the Rugby Union nursery of Marist College Ashgrove in Brisbane.

After a successful three seasons with the Brisbane Broncos Under-20 side, Bryce returned to Rugby Union at the RaboDirect Rebels, as part of the Extended Playing Squad (EPS).

The creative playmaker didn’t take long to find his place in the Rebels squad, with the youngster stepping into the 10 and 15 roles during the Club’s off-season.

2016 saw Hegarty make the move to the Waratahs, finishing off the season with a tally of 52 points in 35 Super Rugby caps since his debut in 2013.

He added 11 Super Rugby caps to his tally in 2017 and in May 2018 he confirmed that he would join Ricoh Black Rams at the end of the 2018 Super Rugby season.

In January 2019, Hegarty, who boasted 62 games of Super Rugby experience after playing three seasons with both the Rebels and the Waratahs, signed for the Reds ahead of the 2019 Super Rugby season.

He made his Queensland debut in Round 2 against the Highlanders in Dunedin. Hegarty played 15 matches after only missing one game (Round 5 v Sunwolves, Tokyo) due to a rib injury.

He finished the season as the Reds highest-point scorer, but also as Super Rugby’s overall second-highest point scorer for 2019 with 156 points (7T, 32C, 19P).