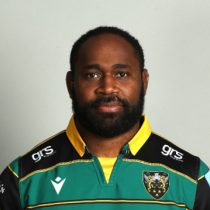 Ratuniyarawa joined Saints just after the start of the 2016/17 season from Agen after making 70 appearances for the French side.

The Fijian lock packs plenty of punch in Saints’ second row, with his efforts amongst England’s elite earning him the Saints Breakthrough Player of the Year award during the 2017/18 season.

Ratuniyarawa made his Fijian debut against England back in 2012. He also a regular within his national side, and earned two caps representing Fiji in the 2015 Rugby World Cup.

His 20th cap came against Saints teammates when England took on Fiji in 2016. A superb ball carrier, an expert at getting over the gain line, and a deft offloader too, Ratuniyarawa has proved himself a threat all over the park for Saints.

He has featured in some of the Club’s most important victories in recent seasons – including wins over Stade Francais to reach the Champions Cup in 2016/17, Leicester Tigers, and Clermont Auvergne.

With over 60 appearances for Northampton, Ratuniyarawa was named in Fiji's Rugby World Cup squad and took his cap tally to 35.