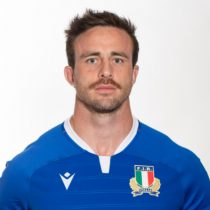 Steyn started his rugby with Natal Sharks in 2012 before jetting to Italy, representing Calvisano from 2013 until 15 when he was offered a contract by Pro12 outfit, Zebre Rugby.

The South African-born was then called up to the Italy national squad for the 2017 Six Nations tournament, a competition where he has played 3 matches in and has not scored yet.

Steyn took his test cap tally to 17 before being included in Italy's 6 Nations squad.

Ahead of the 2019 Six Nations, Steyn had 10 previous 6 Nations appearances.

As of December 2019, he has made 62 appearances for Benetton and has scored 45 points.