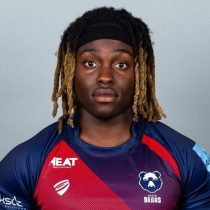 At the age of 15, Johnson-Fisher's name was on everyone's lips following a video that had emerged of him scoring four tries in a single game.

Johnson-Fisher attended Oakham School, playing for the side's football team before coming to prominence in March 2015 with highlights of him scoring four tries in the Vase semi-final of the NatWest Schools Cup.

His displays during the match caught the eyes of rugby and non-rugby fans alike, including the attention of Leicester Tigers academy - with whom he played at under-17s and under 18s level.

After a short period at Leicester Tigers Under 18’s, the then-18-year-old took on an entirely different challenge, American Football.

He became the first non-American to receive an invitation to the All-American Game for high-school prospects, despite never having played the game before.

The hype around his name brought in interests from several Universities, with Johnson-Fisher deciding to take an offer of a football scholarship from Coastal Carolina University.

By the following year, the accomplished sprinter's meteoric rise saw him represent the Jamaica national rugby sevens team in the 2018 Hong Kong Sevens as part of the World Series Qualifier.

In August 2019, he chose to return to rugby and sign a one-year contract with Bristol Bears in England's Premiership Rugby.

At the Bears, he flashed his raw attacking potential scoring tries in the second tier competition the Premiership Rugby Shield, but did not make a senior appearance in the Premiership or European Challenge Cup.

His stay in Bristol was short-lived as he left the Bears in February 2020 to pursue an NFL dream.