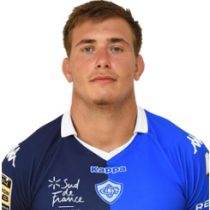 He captained the youth side before some eye-catching performances saw him sign a senior contract during the 2017/18 season.

He went into his first full season with the side having made 8 appearances, 6 in the Top 14 and 2 in Europe.

As of February 2020 he has made 44 appearances for the French side and has scored 10 points.