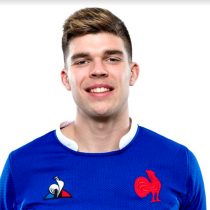 Tipped for a bright future, Jalibert didn't take long to settle in at the top of French rugby as he shot onto the scene in 2017 enjoying a breakout season as he starred in the U20 World Championship for France.

He continued to shine for his club and his great form earned him a call up to the French Barbarians for the November tests against the Maori All Blacks.

His sensational rise at such a young age was rewarded with a call up to the French senior squad for the 2018 Six Nations where he earned his first test cap in the opening round against Ireland.

He debuted at the age of 19 but unfortunately, his debut lasted just 30 minutes has he suffered an injury. Injuries meant he was sidelined for most of his early career.

He returned to fitness late in the 2018/19 season but he was unable to force his way back into the test squad for the Rugby World Cup.

In December 2019, the one test star youngster re-signed with Bordeaux until 2023 having represented Bordeaux 35 times scoring 316 points.

His fantastic return to fitness and form, he was recalled to the France squad ahead of the 2020 Six Nations.